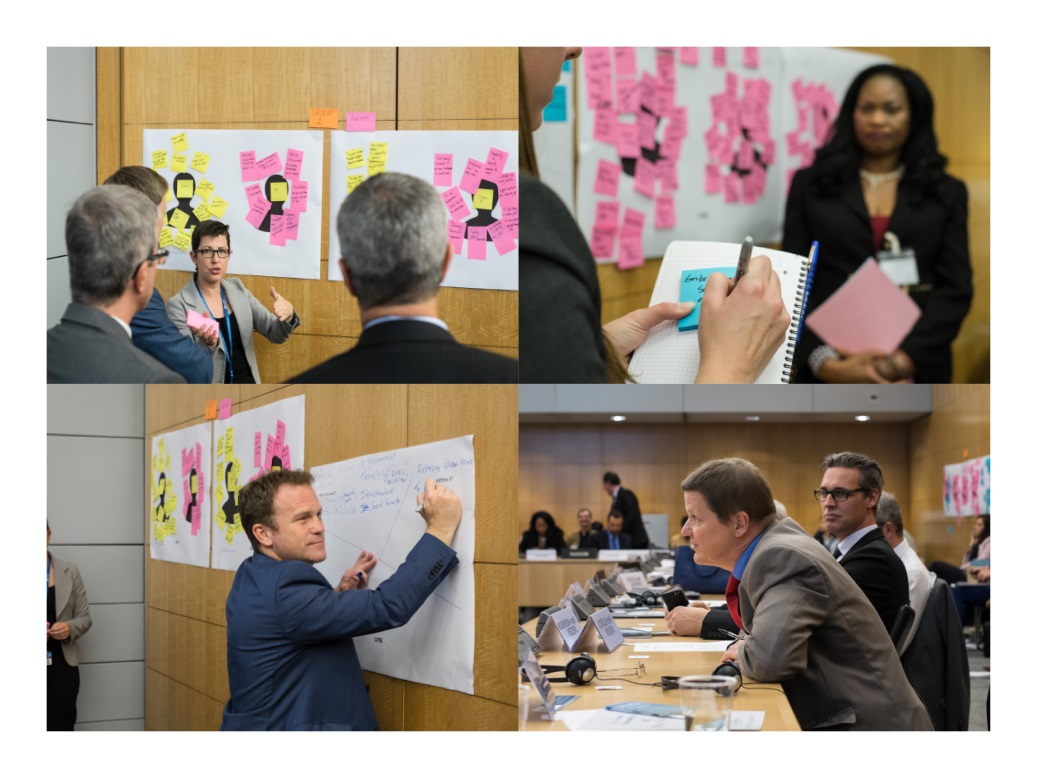 We are living in an age where access to government and politicians is ever increasing, educational levels are rising, and yet we trust government institutions less and less. On 11 October 2017, OPSI ran a workshop exploring “Trust in Government in a Digital Age” as part of the OECD Global Parliamentary Network meeting. The workshop had three goals: first, to introduce parliamentarians to new methods of working on complex problems; second, to put these methods into practice by tackling a burning – but relatable – complex problem (trust); and third, to push forward the debate around what role politicians play in public sector innovation.

Listening was at the heart of this experiment. Parliamentarians are accustomed to engaging with citizens from their constituencies – for example, through town halls, letters and emails, and other community gatherings – because their role is to represent the public in law-making. When citizen needs are connected to complex problems like trust in the digital age, it is even more crucial that parliamentarians take a step back and listen to people.

The 1.5 hour interactive session during the OECD Global Parliamentary Network meeting – developed by OPSI with the OECD Public Affairs and Communications Directorate and based on design and systems approaches – asked parliamentarians to interact with “living personas” from various segments of society, presenting different reasons to trust or distrust the government. The personas were developed in a shorter timeframe than we would typically advise, but thanks to desktop research, conversations with expert colleagues and some decent improvisational acting skills, we had four personas (Citizens A & B, a CEO and a journalist) with varying views, attitudes and problems. We also added an additional layer to frame the problem for each group through prominent electoral concerns – ageism, inequality, growth and jobs, etc.  After listening to the needs and concerns of each persona, parliamentarians then used what they had learned to identify and analyse the real need behind the problem, why it needed to be addressed, and how they could begin to do so.

So how did it go? It was clear that this type of format was new, and for some, uncomfortable.  Letting go of old roles was not easy for many and parliamentarians had to work hard to avoid debate, as the aim of the exercise was understanding the citizen perspective, however contradictory or confounding their opinions and attitudes were.

Most citizens are not versed in the intricacies of government, the background processes at play, or the day-to-day functioning of the public sector. But, in many cases, trust or distrust in government has very little to do with that and the standard solution – educating people more about the public governance system – is simply not enough. Complex issues require a different approach, peeling back and examining preconceived notions and learned behaviours connected to citizen-government interactions.

Did we solve the issue of trust in government in a digital age in such a short session? Certainly not. However, we did manage to tap into the complexity of what it actually means to address trust gaps, and whether, why and how parliaments might intervene.

Trust is a two-way street between citizens and government. Sometimes citizens’ trust or lack thereof may have very little to do with the actual efficiency or capacity of administration, but may be influenced by single-service encounters. Parliamentarians and all public servants must recognise the importance of listening to citizens as they voice concerns and articulate their needs.  Using innovative approaches to the complex problem of trust may help to frame it differently and, hopefully, more in line with actual citizens’ concerns so that, eventually, more effective solutions can be designed.

Parliamentarians joining the Network meeting all agreed that trust was a big problem in society today and that they must take part in addressing it. The workshop clearly showed that they will also need to take on an innovative role in this process. Prior to the workshop, OPSI explored some of the roles they can play in public sector innovation here.

What do you think? Should politicians change the way they interact with stakeholders and address complex issues? What kind of tools and methods should they use? Let us know, either by email or in our LinkedIn discussion group.