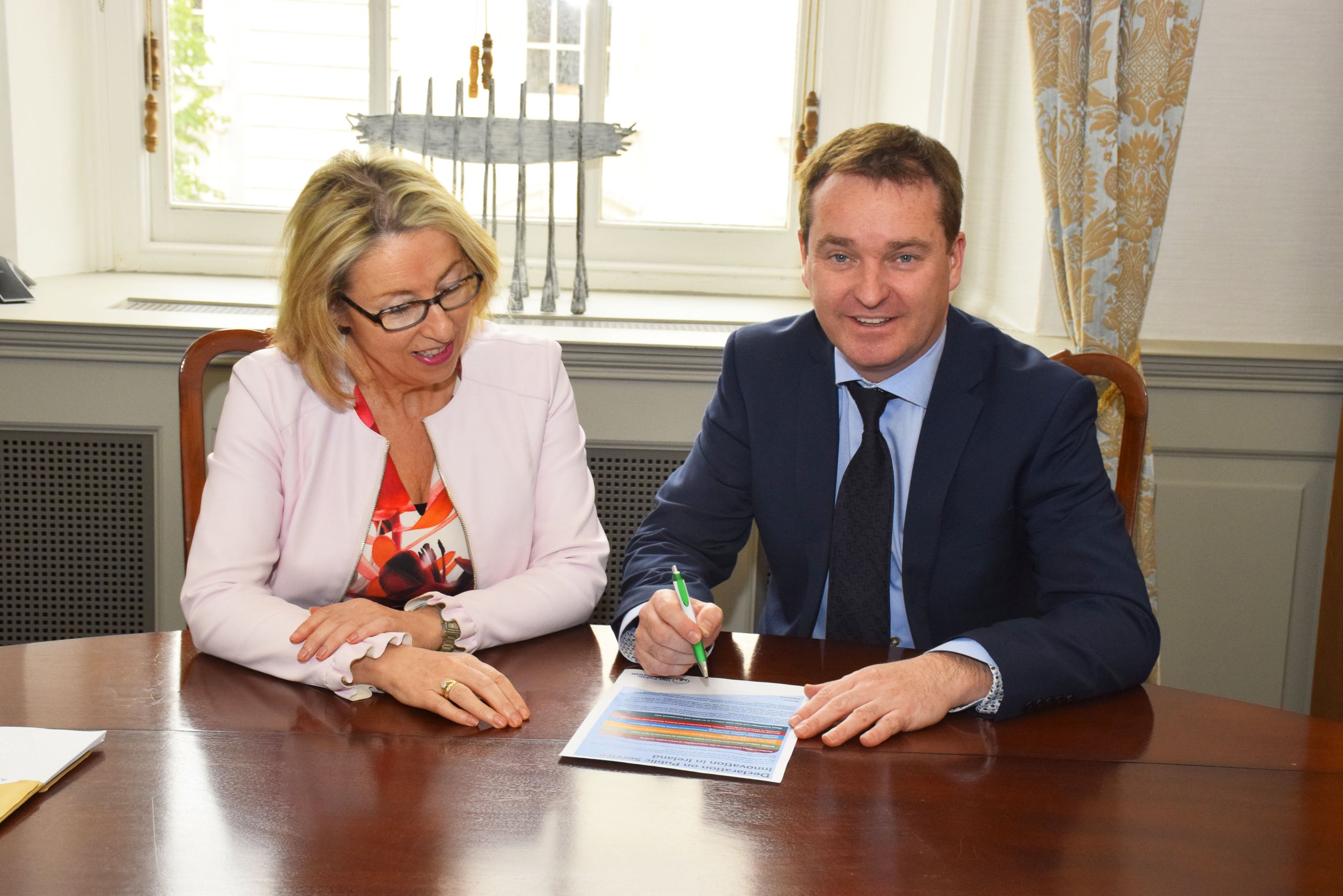 Putting public sector innovation at the top of the ‘to-do’ list is not an easy task for government. Even if there’s notional support, trying something new often means that you face inertia, confusion and even fear about what exactly innovation is, what goals it can serve or how to do it.

To combat these common barriers, the Irish Public Service Leadership Board took matters into their own hands.

The OECD Declaration aims to legitimise and support innovation and to provide some common principles, concepts and language in an area that is still new or nebulous for many countries. Ireland was always a supporter of it but creating their own version was a way to put their local stamp on this subject of increasing importance and international focus.

“Ireland’s adherence to the OECD Declaration is a show of support to the international community, to say ‘we’re behind it’. We took inspiration from it to create our own Irish version for that ‘cascade effect’, to really make it work for us,” said Philip McGrath, Public Service Innovation Lead at the Department of Public Expenditure and Reform in Ireland.

Adhering to the OECD Declaration and devising an Irish version did not happen in a vacuum. In fact, Ireland has been thinking critically about how to improve its public service so it can better serve people for some time.

After undertaking a baseline study of its innovation system to understand its maturity and comparing where it sits with other countries Ireland made a concerted effort to better foster innovation across its entire public service.

In 2017, Ireland launched its ‘Our Public Service 2020’ framework, a whole-of-government initiative with three focus areas:

1) Delivering for the public

2) Innovating for the future

Under these areas, there are 18 action items.  Most action items have or will have their own reference group of expert public servants. In terms of the innovation action, these experts were chosen for their practical innovation experience and good reputation as the ‘best and brightest’ in their sector.

This context made adherence to the OECD Declaration a logical next step and the question of whether to create a local version an easily answerable one. Senior leadership within Ireland’s public service strongly supported the idea of creating a Declaration on Public Service Innovation in Ireland.

Ireland drew inspiration from other countries

When thinking about creating an Irish Innovation Declaration, Ireland connected with international counterparts who had taken a similar journey. McGrath is a member of OPSI’s National Contact Points (NCP) group, a network of country representatives from OECD countries who work in, or manage, country based innovation programs. The network allows representatives to share their experiences and learn from each other.

“When we first started thinking about doing our own, I spoke to my NCP counterparts in Canada and France, which are two countries with a Federal, Provincial and Territorial Declaration on Public Sector Innovation and a Manifesto for Public Sector Innovation respectively, to understand what was valuable about it. They had positive things to say, so it was something I knew I had to explore for Ireland,” said McGrath.

Following these initial conversations with international counterparts, Ireland refined what such a document needed to look like to be successful domestically. After reviewing the OECD Declaration to ascertain the important themes that the Irish version should cover, the brief was this: “it had to be short, clear and simple; something that public could readily understand and immediately use”.

It was important for Ireland that the Declaration on Public Service Innovation in Ireland not appear as a ‘diktat’, rather as something that can help demystify and encourage interest in the topic. With the focus on simplicity and ease of use, the drafting process was one of co-creation. The group of experts (that were created as part of Ireland’s ‘Our Public Service 2020’ reform) were engaged, to ensure that the final product would resonate with fellow Irish public servants.

“I circulated a draft to get initial thoughts.   We took some time to meet in person for a mini-workshop. We thrashed it out, going over everything in detail and sought agreement. Co-creation was important and we built on the work done by the OECD, the French and the Canadians. The conversations it brought about helped to focus on what is important to us as a public sector and what its purpose is. Our core question was ‘what do we want to achieve with this?’” he said.

McGrath sees its its purpose like this: “this is about initiating a conversation about innovation at an organisational level. If you are a public servant, you now have something to show your manager and say ‘is our Department signed up to this principle? Are we actually committed to innovation? Will you support me to innovate?’”

Culture change (and case studies) are on the horizon

Ireland chose to pursue an ‘opt-in’ system, allowing individual public service organisations to choose to sign up to it. In due course, central government in the Department of Public Expenditure and Reform will seek examples of case studies or actions that the Irish Innovation Declaration has inspired. It will collect these to feed back out to the public service to show examples or case studies of innovation, unearth novel practices and look for things that could be adapted or scaled cross-departmentally. McGrath sums it up, “our Declaration is a conversation starter. We want to see innovation as a standing item on the each public service organisation’s agenda. It has to be business-as-usual.”