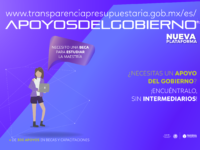 The information on the different procedures of access to benefits is scattered among many different agencies websites, whereas the platform "Apoyos del Gobierno" aims to simplify through Artificial Intelligence that any interested party can consult the details of Federal Government programs in a single place. Based on neurolinguistics analysis, the platform not only provides predicted results considering relevant contextual words, but also enhances searches considering the user’s profile.
Artificial Intelligence (AI)Open DataOpen GovernmentSocial Innovation
Case Study

With the drafting of its first Constitution, Mexico City had a great opportunity: to explore innovative ways of crowd-sourcing this historic document, setting an example to other cities in the world on how to design important democratic experimentation at the scale of a megalopolis. The result of the entire Constitutional process is a forward-thinking document with progressive social policy and human rights at its heart. It became a legal reality in September 2018.
Citizen EngagementCommunicationDataExperimentationFutures and ForesightGeolocation and MappingPeople Networks/Communities of Practice
Case Study

Agenda2030.mx promotes the design of evidence-based policies in a transparent and collaborative manner. Academia, public officials and decision-makers can follow the progress of the indicators measuring the global goals with official data and user friendly visualizations.
Citizen EngagementDataDigital and Technology TransformationOpen DataOpen GovernmentOpen SourceProcess Facilitation and Co-design
Case Study

Strategy for Institutional Openness for Building an Open State in Mexico

In 2015, a constitutional reform on transparency allowed the INAI to propose a specific set of actions to adopt and institutionalize open government principles in Mexico. Thus, it designed a comprehensive strategy that mainly consisted of the implementation of provisions, methodologies and public policies to guide and articulate the design, implementation, and operation of open government in public institutions, the three levels of government and the three branches of government nationwide.
Open GovernmentProcess Facilitation and Co-designPublic PolicySocial Innovation
X